I found this recipe online and I have to say it was absolutely delicious.  I have adjusted the original recipe and here is the one that I used. 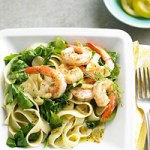 My best friend whom I mentioned in a previous post came to visit for the weekend and of course we had an awesome time.  We always plan to go for random adventures and this time I wanted to do something she’d enjoy.  On a previous visit she had mentioned that she really enjoyed culinary trips which gave me an idea.  Toronto is known for it’s food trucks and what a better surprise than to take her on a food truck extravaganza.

On Saturday, we got ready and headed downtown.  Most of Toronto’s food trucks were at Echo Beach for the CBC Music

Festival but Hogtown Smoke was at Leon’s in front of the Roundhouse.  Her and I both enjoy BBQ so this truck was a great choice.  Hogtown Smoke is Toronto’s mobile BBQ Smoke House and it far more than delivered on taste.  I ordered the Beef Brisket on a Bun and slathered it in the Hogtown Smoke Original Mild BBQ Sauce.  I instantly regretted my decision to wear a white top as the chances of making a mess grew exponentially.  The beef was tender, tasty and cooked to perfection.

After we let the food settle, we walked over to the Roundhouse which houses the Steam Whistle Brewery.  While I don’t drink beer even when not pregnant, my friend loves it.  They were handing our complementary beer which only added to the delicious BBQ we just finished.  We checked out the model train displays they had in the front and then were off to the Harbourfront.

It was Doors Open Toronto and the water front was busy with boats.  Captain Flinders and his Pirates had invaded Toronto and I thought that her and I could enjoy a boat tour of Lake Ontario.  For only $15, we were able to check out the Toronto Islands, enjoy some quality time and chat.  Overall it was a wonderful afternoon downtown.  Later that evening, we went to the movies and saw The Hangover 3, which wasn’t as good as the previous two.

It was an awesome weekend with a more awesome friend.

Yesterday, I had thought that it was ‘time’.  I have been feeling pretty craptacular lately and while laying in bed I felt a gush and then contractions.  I called the hospital and they told me to come in.  Within an hour I was in the oh so flattering gown and hooked up to the monitors.  The doctor came in to inform me I was having mild contractions but that it was false labour.  I stayed home today to get some rest and my contractions were on and off but never increasing in intensity.  So I looked online and here are just a few signs that you are having false labour and not real labour.

May – and it’s time to play outdoors again.

The worlds is filled with flowers.

On lawns and hills and window sills

And everywhere I hear the sound of little things

I think my heard will not be still

’til I roll down a grassy hill.

Ahoy Mateys!  Get your wee buccaneer’s ready to board the poop deck and into the crow’s nest to see Pirates and Captain Flinders invade Toronto’s waterfront.  Shiver me Timbers! Captain Flinders is more fearsome than Captain Hook and Blackbeard on the Seven Seas and on May 25th from 10 am – 3 pm, Lads and Lassies can come watch their favourite scallywags do what they do best, looting for dubloons and booty.  Come prepared with your camera in hand, eye patch firmly placed and shipshape or be prepared to walk the plank to become shark bait!  Weigh anchor and hoist the mizzen and come see pirates this weekend, admission is free!

I had a lot of fun writing this post, not only because I love pirates but because I got to speak like one, argghhh!  For some more Pirate Lingo, please click here.

Today the Princess had her very first school dance.  The dance was for the fundraising the children had done to raise money for their school’s physical education program, with partial proceeds going to their sister school’s healthy snack program.  It was a “Hollywood” theme and the children were encouraged to dress up.  There was even a mini red carpet for them to walk down with parental paparazzi to take their photo.  Needless to say, the Princess posed and I even had one mother tell me I should enroll her in acting classes because she “just loves the camera.”  Tell me something I don’t know LOL!  The Princess danced the entire time and loved every minute.  It was a real joy to watch.

I am wishing all those deserving Mom’s out there a wonderful day.  I hope you are pampered, appreciated and loved for all that you do.  I have had a wonderful day with Hubby and the Princess and this marks the first year that I am both Mommy and Mommy-to-be.  I received lovely flowers and cards, the gift that I’ve been asking for and not to mention a homemade breakfast and dinner as well as some well deserved Mommy alone time.  I am wishing you all the same!

For most people, they either look like one parent or the other.  The Princess is her Daddy’s mini look-a-like.  And after today’s 3-D ultrasound, our Rainbow is too.  Not too long ago, I had a dream where the Rainbow was big, had dark brown hair and looked like me and for a while I thought that maybe it was a premonition of what was to come.  But when I saw his handsome face come on the screen, I burst out laughing because it was startling how much he looked like his Dad and sister.

Error: Twitter did not respond. Please wait a few minutes and refresh this page.